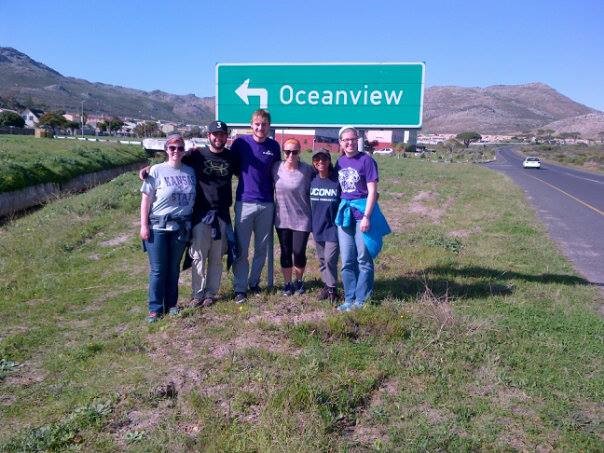 Located about 45-minute drive from Cape Town, Ocean View township was formed in the late 1960s to 1970s during the Group Areas Act; all coloured people were forcefully relocated from the ‘white communities’ of Simon’s Town, Fish Hoek, and Noordhoek to this settlement. It was ironically named Ocean View, with residents being removed from their previous sea-side homes and views. As a result, its history is embedded in apartheid, and there is still much bitter resentment among many people. The coloured people of Ocean View not only originate from the Khoi-San group but have slave ancestry and therefore have a unique, separate heritage from black South Africans.

Today there are close to 30,000 people who live in Ocean View in brick houses and flats (apartments). Consequently, because housing is not such a concern in this township, they face many other problems. Life is a struggle for the many residents here, having to face the challenges of huge unemployment, widespread drug use, alcoholism, gangs, prostitution, and violence. Thousands of lives are being destroyed by the local drug culture, where a drug called tik(crystal meth) is being sold for as little as R5 (less than $1). Many youths are embroiled in this drug, with the issue affecting all ages and generations within society. Gangs and violence stem from the drug problem. Ocean View like all parts of South Africa has a high rate of crime.

For decades the coloured community has been caught stranded between the whites and the blacks, and so has been neglected for years. Some claim to have been ‘not white enough’ during apartheid and ‘not black enough’ now, and as a result, many still feel abandoned with no hope or ambition for the future. This attitude is a major cause of the struggles Ocean View faces. Youths and adults alike lack hope and aim for improving their lives by getting an education or working, and so problems such as unemployment swell. People turn to other sources of income such as crime, drugs, and prostitution just to make ends meet.

Ocean View has a number of facilities but is still extremely ill-equipped for the needs of the community. The main language spoken within the township is English and Afrikaans.

Although Ocean View is a community ravaged by social problems, some residents are beginning to stand up and fulfill the potential that has been suppressed for decades.

Volunteer Mzansi AFRIKA originated from this community. It knows and understands the people, has originated LEADSA initiative projects within the community that has to lead to the upliftment of people within these communities.

This makes Volunteer Mzansi AFRIKA the leader in volunteer and travel support. Volunteers are fully supported and mentored by professionals that will “walk”  beside you whilst you experience the real life within a community in South Africa.