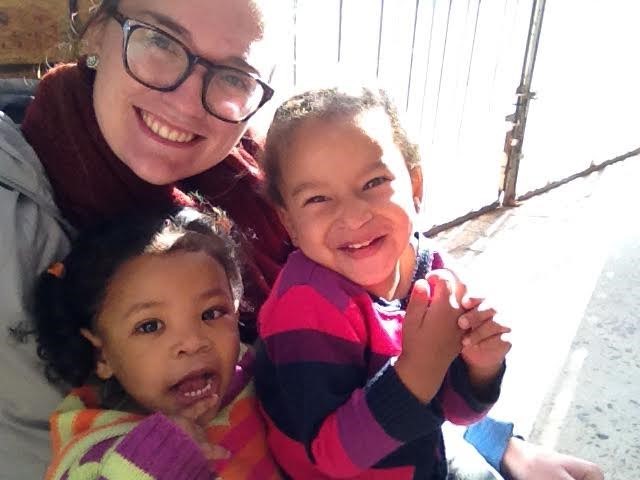 Located between Scarborough and Simon’s Town lies Redhill, an informal settlement of approximately 400 makeshift households. Originally started in the 1980’s, Red Hill has remained a small population of around 1000 people, and consists of a black, coloured and mixed area of residents. The informal settlement is located on a large hill with stunning views of the Atlantic Ocean, with residents attracted by the solitude of living in the ‘country’. Situated on the top of Red Hill, there is a coloured group of around 200 people who mainly speak Afrikaans; towards the middle of the hill, there are around 600 black Xhosa speaking people, and the lower settlement of around 200 is a mix of both.  Despite these separate areas, there is very little segregation and there is a real sense of community at Red Hill.

In stark contrast to the sweeping scenery, almost all residents live well below the poverty line; even though there has been slight gradual improvement, it is still very much a community in need. Red Hill has only had running water since 2005 and electricity since 2007, and almost all the residents live in simple constructed shacks. These shacks are extremely vulnerable to the elements and can lead to difficult winters, dealing with lower temperatures and rain. Fires are also a real risk for the residents at Red Hill; the area is surrounded by woodland, which can be highly dangerous in the dry, hot summers. Many residents have lost homes at one time or another, and continue to live under the constant threat of doing so again.

Unemployment is a major area for concern in the community; it is estimated that around 80% of the population are unemployed, which leads to a range of other issues. There is widespread alcoholism and women and children often suffer as a result. Coupled with crippling high unemployment rates, around 20% are infected with HIV and TB, and the community has very little access to healthcare and emergency services. There is only a part-time medical clinic and no school, so locals often have to walk down the hill for the services they need. Due to a complete lack of schools in Red Hill, children have to walk down to the nearest bus stop about half a kilometer away to commute to their nearest school.

Regardless of the high rates for unemployment and disease, crime is not a major problem in Red Hill. The rate is relatively low because there is such a sense of community present, and people do not like to steal from family and friends.  However, the main problem the informal settlement faces is attitude. There is a lack of direction for people, who have adopted an approach where they do not know how to progress. A lot of people lack vision and the hope required to break out of poverty, and can sometimes be too reliant on the government for help. Young people struggle for identity and do not have aims for future life, and so can stop pursuing goals and attempts to improve life for themselves and their families.

Even in the face of these challenges, Red Hill is a loving and welcoming community who are grateful for the help they receive. Christianity is the main religion in the informal settlement, but they need more of Christ to continue progressing away from the struggles they face.